This article provided by Training-Conditioning

Strong ankles are essential for athletic performance. Unfortunately, this area of the body can be very susceptible to injury, which means that strengthening the ligaments and muscles around the ankles is all the more important. Here are some exercises to help make that happen.

Stana Landon of Active.com explains that ankles are put under a lot of stress any time an athlete performs a movement like running, cutting, or jumping. Strong ankles will be better able to handle this stress, and athletes will be less likely to experience chronic injuries, such as shin splints and Achilles tendonitis. That’s why she suggests incorporating a number of ankle-strengthening exercises into your training.

Better balance increases proprioception, which is the body’s ability to realize its place in space.

While standing on one leg, do a half squat. Do 10 reps with the opposite leg out in front, 10 with it to the side, and 10 with it behind. Repeat this three times on each leg.

Start by standing on one leg for 30 seconds and then switch. Gradually work your way up to holding each stand for a minute.

Stand on one leg directly across from a partner. Then, throw a ball back and forth with the partner, and have them throw it to the left and right, as well as low and high. Aim to perform three sets of 30 throws.

For ankle-strengthening exercises, Landon suggests using a TheraBand. This is a great tool for providing resisted range of motion in every direction, such as inversion, eversion, dorsiflexion, and plantar flexion. During these exercises, place the band around the top of the foot and curl the toes at the end of each movement. This will help work the foot’s internal muscles. Each exercise should be done in three sets of 20.

Along with using the TheraBand, Landon also suggests doing calf raises to build ankle strength. These are simple and don’t require any equipment. They should be done both seated and standing in order to target both the calf muscles and the Achilles tendon. Aim for three sets of 20.

Lastly, Landon recommends doing plyometric exercises to toughen up the ankles. These jumping movements will help make the muscles around the ankles stronger and more explosive. Two exercises she mentions are scissor hops and standing squat jumps.

Start in the lunge position. Then, jump and switch feet in mid-air, landing with the opposite foot forward. Repeat 10 to 15 times.

Start by getting into a quarter-squat position. Then, explode up from there into a jump and land back down softly. Repeat 10 to 15 times.

One of the many benefits of proper training is injury prevention. By strengthening an activating the hips and glutes you can reduce the risk of ACL injuries.

ACL injuries are devastating to high school athletes. The recovery time will usually mean an athlete will lose a season of competition. While injuries can not be prevented, proper training can certainly reduce the risk of injury.

In the video below Jerry Schreck, Head Strength Coach at Bucknell University, details a few Hip and Glute exercises that he uses to help prevent ACL injuries.

The You Tube video below has audio, so please make sure that your sound is turned up and that you have access to the site. Note that some schools block access to YouTube.

This position statement offers guidelines for athletic trainers, and strength coaches on how to prevent noncontact and indirect contact ACL injuries in athletes.

Lower extremity injuries make up 66 percent of all sports injuries, with the knee being the most commonly injured joint.1  Anterior cruciate ligament (ACL) injuries are quite common in athletes, and unfortunately, surgical reconstruction and rehabilitation do not prevent long-term morbidity or decrease the risk of a future ACL injury.2-7 The costs associated with surgically reconstructed ACL injuries range from $5,000 to $17,000 per patient; however, the estimated long-term societal costs may be as high as $38,000 per patient.8-13 Perhaps even more alarming than the high financial costs was a report14 indicating that the rate of ACL injuries was rising rapidly.

The position statement offers guidelines for athletic trainers, physicians and other health care professionals on how to prevent noncontact and indirect contact ACL injuries in athletes and physically active individuals.

Effects of Injury Prevention Training Programs on Injury Reduction and Performance Enhancement – two primary areas of benefit include decreased risk of ACL and other knee injuries as well as improved performance.

Elements of injury prevention training can vary among programs to help decrease injury rates and improve neuromuscular function and physical performance. While these guidelines do not promote a specific program or group of exercises, general recommendations are provided.

All individuals engaged in sports and physical activity are advised to participate in a multicomponent preventive training program. Those who participate in specific sports or display certain traits should be targeted for this training as they are either at a higher risk of ACL injury or have a greater potential for benefit.

Do you utilize Olympic movements in your strength and conditioning program. There is no doubt these exercises are beneficial, but are the worth the risk. In this post learn how to teach an efficient first pull.

This article was provided by Coaches  Network

Many high school programs are using the Olympic movements in their daily programming. The debate on whether it is the best way to train high school athletes–is the risk worth the reward–will probably go on for the rest of time. I won’t go into the debate here because I believe that utilizing these movements is beneficial. However, if you do not have the knowledge base to teach proper positions and progressions or spot technique flaws (or if you don’t have the time, space, or equipment), there are other options.

If you chose to utilize the Olympic lifts as part of the training program, at some point you will witness a poor set up and an inefficient first pull. This will happen regardless of their training level. As a coach, it’s important to remember when teaching these lifts that, just like with so many movements in sport, the devil is in the details.

The most common mistakes I have witnessed in my athletes in their set up is that they are either too far off the bar at the start or too far back on the bar. In both instances they have improper weight distribution in the feet at the beginning of the first pull, which will cause the athlete to move the bar around the body, and not the body around the bar.

If the feet are set too far back from the bar they will be unable to shift the weight to the heel as they initiate the pull. See the photo below: 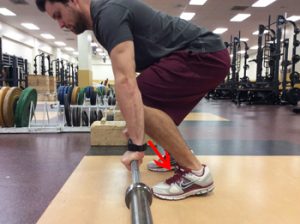 The same holds true if they are too far back on the bar, which means they are behind the bar and on their heels so they have nowhere to shift their weight to. See photo below: 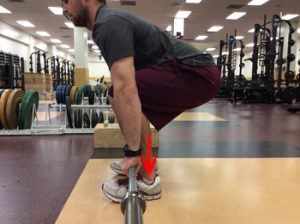 Both of these set up mistakes will force the bar to move around their body (knee), instead of moving vertically next to the body.

I start all athletes that are new to our program with a simple pull from the floor to the knee. They will perform this exercise using a slow concentric contraction taking four seconds to raise the bar from the technique box to the knee. This places emphasis on teaching the athlete to feel the movement. I do not want them jerking the bar off the floor. Here is a quick look at how the movement should be performed:

Doug Bull, MS, CSCS, is starting his 11th year as Strength and Conditioning Coordinator for the Deer Park (Texas) School District. He has more than 20 years of strength and conditioning experience ranging from junior high school to NCAA Division I athletics, including coaching stops at Northern State, Fort Hays State, Illinois State, and The United States Naval Academy. He is nationally recognized for the work he has done to promote training secondary athletes and has served as a consultant in the creation of over a dozen full time strength positions nationwide. His web site is: www.dpstrength.com.

Preventing knee injuries are important for all athletes. In this post see data the indicates which sports and specific activities produce the most knee injuries.

Each month, The Center for Injury Research and Policy at The Research Institute at Nationwide Children’s Hospital provides T&C with an inside look at their studies of high school athletic injuries. In this installment, Dawn Comstock, PhD, takes a look at knee injuries, examining gender-specific trends and breaking down each sport’s most common mechanisms of injury.
Athletes often devote hours to strengthening their legs and increasing knee flexibility, hoping not only to excel at their sport, but also prevent a season-ending knee injury. And athletes have good reason: knee injuries are one of the most common sports injuries, with U.S. doctors and surgeons treating over half a million high school student-athlete knee injuries every year. They are also among the most costly, and knee injuries account for almost half of all surgeries performed among high school athletes.

The National High School Sports-Related Injury Surveillance Study, in its third year of data collection, has found that high school athletes sustain approximately one knee injury in every 2,500 exposures. As one might expect, risk of knee injuries varies by sport and whether an athlete is practicing or competing. Here are some important facts on knee injury incidence:

While knee injuries will never be completely eliminated, sports injury surveillance can help trainers and coaches develop sport-specific strategies to decrease their athletes’ risk for knee injuries. Here is what the latest research shows us regarding which activities are most commonly cited in a knee injury event:

Dawn Comstock, PhD, is a principle investigator at the Center for Injury Research and Policy at The Research Institute at Nationwide Children’s Hospital. She is also an assistant professor at The Ohio State University in the College of Medicine and the College of Public Health. Her research interests include the epidemiology of sports, recreation, and leisure activity-related injuries among children and adolescents as well as the life-long health benefits associated with an active childhood. She can be reached at Dawn.Comstock@NationwideChildrens.org.