By Scott O’Dell
Scott O’Dell, MA, CSCS, is the Director of Strength and Conditioning at East Central University of Oklahoma. Author of the book, The Power Revolution, he has been an NSCA conference speaker in areas such as plyometrics and strength development. 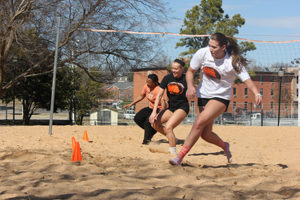 Legendary NFL running back Walter Payton retired from the game with a host of league records, including most rushing yards and most all-purpose yards. However, his most impressive achievement may be that, despite playing in one of the league’s most punishing positions, he started every game of his 13-year career but one, and that was due to a coaching decision, not an injury. When asked about his remarkable durability, Payton attributed it to the sand workouts he put himself through in the offseason.

In the time since, the benefits of sand training have been well documented, and athletes ranging from basketball players to boxers have followed Payton’s lead. Sand training is a simple, low-impact form of resistance training. According to a 1998 Belgian study, running on dry sand requires 1.6 times more energy than running on stable surfaces, and walking in sand requires 2.1 to 2.7 times more energy. This increased resistance helps improve quickness and build explosive strength because the muscles experience a greater workload during training exercises.

Another benefit is the instability of the sand, which requires the muscles that stabilize joints in the ankles, knees, hips, lower back, and core to continually compensate and adjust during movement. This causes a greater range of motion in joints and strengthens the muscles, improving balance and preventing injury.

In addition to these stabilizer muscles, prime-mover muscles are activated, making sand training easier on the joints than workouts on stable ground. Sand work also alleviates compressive forces on the joints during running, jumping, and walking. With less stress on the joints, overtraining symptoms are less likely to occur.

A sand workout is also useful for improving an athlete’s cutting ability because the resistance of the sand makes it easier to achieve the ideal 45-degree body angle when accelerating out of a cut. When cutting, the foot plants in the sand, causing the body to react with a harder knee drive upward. This helps develop the high-knee motion critical to the acceleration phase of sprinting and eliminates wasted backward leg movement. It also trains the athlete to keep positive shin angles–where the ankle is behind the knee–which is an important component of acceleration. In addition, maintaining the 45-degree angle keeps an athlete’s hips low while cutting, which provides more activation of the glutes, hamstrings, and quadriceps, and takes energy and stress away from the knees.

Positive shin angles can also be developed by performing plyometrics in the sand. These exercises are effective because they force the athlete to perform a hard knee-up, heel-up, toe-up movement to lift the leg after the foot has been driven into the sand.

Here at East Central University of Oklahoma, athletes work out in the sand two days a week during the offseason. When a team first begins plyometric work in the sand, we allow the athletes to run through the exercises at their own pace so their bodies can adjust to the higher workload. Single-response plyometrics such as squat jumps and star jumps are introduced anywhere from one to three weeks later. These exercises involve performing a rep of a movement, reloading and resetting the body, and then repeating the process for the remaining reps. The goal for the athlete is to achieve good technique, while improving flexibility, balance, and overall body strength.

The following techniques should be emphasized during sand training plyometric exercises:

Toes and heels up: The toes and heels should be lifted as high as possible to train the feet to be quicker off the ground and to decrease the impact of landing.

Knees up: Bringing the knees up prepares the lower body to drive forcefully into the ground on the next jump, while also flexing the joints to decrease the force of landing.

Thumbs up: Forcefully swinging the arms ahead of the body will also increase power production.

Muscle tension upon landing: Landing with the muscles in the ankles, knees, and hips flexed will aid in shock absorption, so an athlete will have minimal contact with the ground before springing into the next jump.

Once an athlete has developed proper technique, we focus on flexibility and stabilization by adding multiple-response plyometrics. These movements are performed continuously, without any reloading or resetting in between. Teams are generally ready for multiple-response movements between weeks three and five, depending on how well the athletes progress.

For agility drills, we generally set up two or three stations on each side of the sand pit. We try to incorporate a power cut such as a pro-agility drill to focus on the body mechanics, muscles, and joints of the outside cutting foot, as well as a speed cut like a Figure 8 to perform the same work on the inside cutting foot. Finally, to work on the mechanics, muscles, and joints involved in transitioning from one move to another, we include a transitional agility drill such as a speed square.

Here are the plyometric exercises we use with our men’s and women’s basketball team:

Here are the agility exercises we use, both during the preseason and offseason: