As one of the most commonly used exercises in high school strength training programs, the bench press can help athletes make gains in the weight room and on the playing field. As with any exercise, it is important to begin with the basics and follow a progression before engaging in the full exercise. This will help your athletes complete the movement correctly, gain the most benefit, and decrease the chance of injury.

In a blog for the International Youth Conditioning Association (IYCA), Tobias Jacobi, current Strength and Conditioning Coach at Strong Rock (Ga.) Christian School who previously spent 15 years coaching at various levels, explains the progression plan that he uses with his athletes. He recommends progressing athletes through multiple levels before reaching the pause bench press:

Perform a push-up with both hands on the bench. The athlete’s chest should touch the bench during each repetition. If an athlete cannot hold the proper posture and execution, this movement can be made easier by putting their knees on the ground. Jacobi suggests waiting to progress the athlete until they can perform 10 perfect repetitions of this movement.

The athlete should focus on holding their body posture and proper execution throughout the movement. One coaching cue Jacobi uses is telling athletes to squeeze their elbows into the body. Again, if the athlete is struggling to do this movement, they can make it easier by putting their knees on the ground. Jacobi recommends athletes be able to perform 10 perfect repetitions before moving to the next movement.

Once athletes have mastered these exercises, Jacobi’s recommended progressions begin to utilize weights as resistance. But first, he covers a few topics with his athletes. One of these is proper set up on the bench. Jacobi has athletes lie directly under the barbell in order to create a straight line between the barbell and eyes. Next is body position. 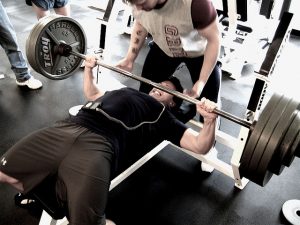 “First, we want the shoulder blades in the bench,” write Jacobi. “Second, we want the hips to stay in constant contact with the bench for the entire time throughout the movement. Lastly, we want the feet flat and pressed into the floor. This allows for the lifter to use the lower body by pressing through the floor during the bench pressing exercises.”

Jacobi also focuses on grip. He begins with barbells and progresses to dumbbells for each individual exercise, as the barbell adds stabilization. Jacobi utilizes blue and red tape, with the blue tape on the outer ring of the barbell and the red tape covering from the smooth part of the barbell towards the middle. Athletes are told to go no wider than pinky fingers on the blue tape. Once athletes are taught these coaching cues, they can move on to the next progressions:

This move is similar to the floor press, but utilizes dumbbells in place of the barbell. Jacobi explains that athletes’ palms should face towards each other, as this helps keep the elbows in the proper position.

Now on a bench, have the athlete once again use the barbell, lowering it in the same motion that they executed the Floor Press, stopping just above the chest. Then, the athlete will press upward until their arms lock.

This exercise uses dumbbells and the same grip position as the DB Floor press. Begin by extending the dumbbells upward. Lower them until they touch the chest and then press upward until the arms lock out at the top. Jacobi stresses the importance of controlling the weight throughout the movement, so athletes should focus on not allowing the weight to bounce off their chest.

Have your athlete grip the barbell with their middle finger on the red tape. Lower the barbell until it touches the chest and press upward until the arms lock at the top. Again, the barbell should be kept in control throughout the movement.

With the bench at an inclined position, have athletes hold the dumbbells with palms facing each other. Follow the same movements as the DB Bench Press, focusing on controlling the weight throughout the exercise.

This is the final movement in the progression. According to Jacobi, athletes should lower the barbell until it rests on the chest. After a three second pause, explosively press the barbell upward until the arms lock at the top of the exercise.